This year’s Anniversary trip was a big one… to celebrate 10 years we traveled over the “pond” to London for a week.

We did a TON of things and had an AMAZING time… but this blog’s focus is on Tiki and we had two great evenings that warrant tiki blog documentation.  The first was a visit to the oldest Trader Vic’s currently operating.  The London version of the Home of the Original Mai Tai opened its doors in 1963 and have been a part of Tiki History ever since.

Being in a large hotel (London Hilton-Park Lane) makes it easier to find than many newer tiki bars, that usually favor city outskirts or back alleyway entrances.  However, in true “tiki fashion”, you enter and immediately head down a winding staircase to escape from the hustle and bustle of the big city hotel. The decor is fantastic!  Wood, bamboo, lamps, canoes, all the things that you would expect to see in a historic tiki bar.

As a side note, this was my first visit to a Trader Vic’s establishment… yes, I had to go all the way to England to pay tribute to Vic.

As normal, we wanted to sit at the bar however that became a little bit of a challenge.  On one side of the bar there are 4 barstools in a space that really should only fit 3. While the other side of the bar has a lot more space, we were told it was reserved for a special event.  We chose to squeeze on to 2 of the 4 stools and while we were a bit crammed at first, it all worked out.

I, of course, had to start with a Vic’s Original 1944 Mai Tai. I’ve waited a long time to have one… however I might have to wait a bit longer.  While the drink was fine, it was not crafted how Vic would have wanted.  The biggest issue is that they used Mount Gay Rum… I have nothing against Mount Gay, but Vic used a Jamaican Rum.  I’m a realist, I know that 17 year J. Wray & Nephew is long gone, however I believe that an “Original 1944 Mai Tai” should still feature an aged Jamaican rum.

I didn’t let this disappointment sour our evening but I was a bit taken back.  Speaking of sour, Mrs. Trader really enjoyed her London Sour… created for the opening of Trader Vic’s London. 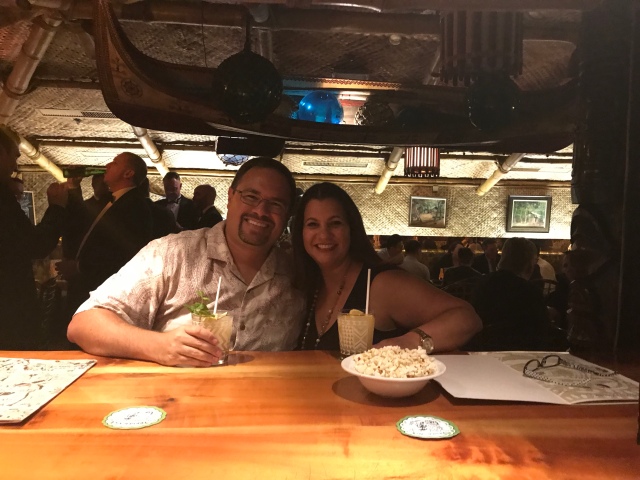 We indulged in some bar bites, including the Beef Cho-Cho which are soy-sake glazed beef skewers that you finish yourself over a flame.  They were both fun and delicious.

We also had the opportunity to experience a number of different drinks including the Suffering Bastard, Navy Grog, Trader Vic’s Sling and some anniversary extras (including some drink tastings and a delicious cake). 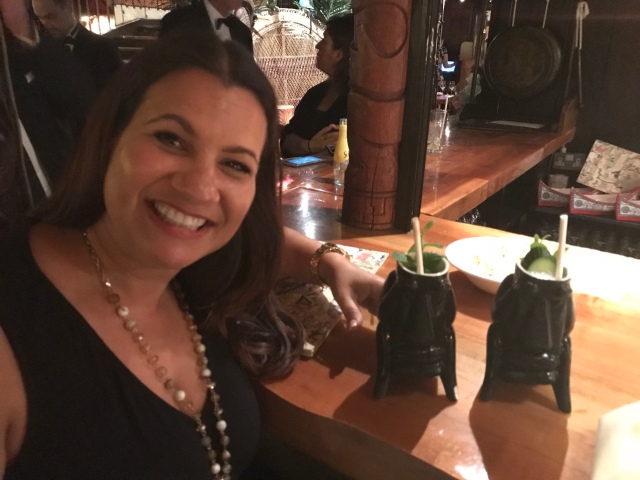 In the tiki world I feel like it is important to be kind but also be honest among friends… I wasn’t blown away by the drinks from the menu, however our bartender, Aleks, was given free reign to mix us each up something based on our pallets and both drinks he was SPOT ON!  Aleks was a great bartender… he was funny, engaging, wanted to know about us.  It was wonderful to be able to sit at the bar and discuss rum, tiki drinks and Trader Vic with him.  He was excited to learn about my home tiki bar and our tiki travels. 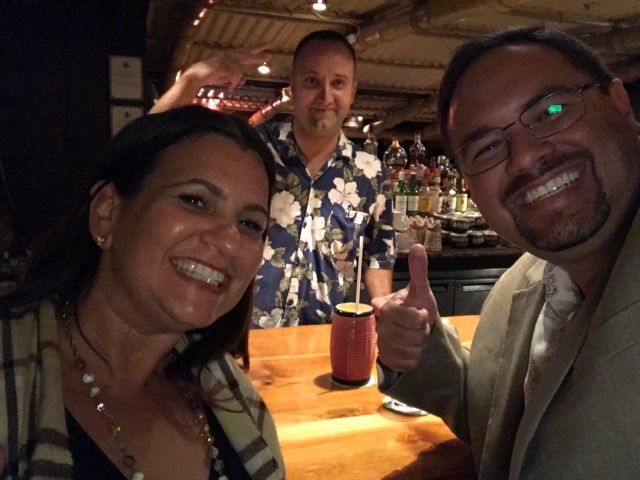 Also, we had the opportunity to talk with the Assistant GM, Guy, who too was wonderful to talk with.  Both gentlemen were very welcoming… both welcoming us to Trader Vic’s as well as to London (as it was our first night).  Guy even allowed us a parting gift of a menu to bring back to Trader Jay’s.

Overall, I would never steer anyone away from Trader Vic’s London.  We had an AMAZING evening!  The decorations are wonderful!  They are quintkicensial tiki from one of the ORIGINALS, there is a bit of everything and I want to take it all back to Trader Jay’s.  The team is warm and welcoming and offers an amazing escape from the very Non-Tiki London.  The drinks from the menu were fine but chat with your bartender and let them get creative and you should be pleased!

(Special Note to Guy if he is reading… I’m still disappointed that the camera wasn’t charged for the wall of tiki!)

One thought on “The Oldest Trader Vic’s – London”